At the beginning of the pandemic, RPN Rafal Fratczak knew healthcare workers were dealing with a lack of resources and stress on the job, so he did his best to help his coworkers and SEIU Healthcare members across Ontario. He took political action fighting for pandemic pay and proper PPE and even started a phone tree to support coworkers who got sick from Covid-19.He’s featured in our Stories from the Frontlines piece from Volume Three of our Nursing Division magazine Scrubs and Scopes, released in May 2021. 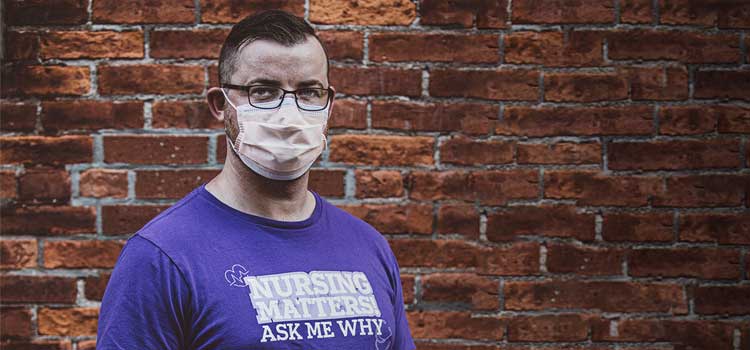 COVID-19 cases have now been present in Ontario for more than a year. We have seen three waves of infections, and there have been more than
483,000 cases in our province. To say it has been a challenging year for nurses is an extreme understatement. While nurses have all faced similar
struggles this past year, everyone’s story is a little bit different. It is critical nurses share their experiences so that we never forget and so that
positive changes can be made going forward.

Rafal Fratczak, an RPN who works in a Niagara region hospital, has been reflecting on why he became a nurse in the first place. Growing up he had been a care giver for his grandmother, and again when he moved to Canada to live with his elderly aunt and uncle.

“For me, nursing is about holding my patients’ hands and giving them hugs. I want to provide my patients with compassionate care. I want to listen
to their stories and make them feel heard when they do not have family members around,” he says.

Even before the pandemic, Rafal noticed that nurses are often so focused on the needs of their patients that they ignore their own well-being. He had already observed increased workloads and elevated levels of stress among nurses. That is why he became interested in getting more involved with his union SEIU Healthcare.

“The union takes care of nurses and their needs,” says Rafal. “That is why I stepped up and became a union steward at my hospital. Nurses just keep taking on more work, because it seems like the right thing to do for our patients. But this leads to burnout, injuries, and stress leaves.” During the 2019 Nursing Division Convention, he won the Region 6 seat on the Nursing Division Board.

“We had our first big meeting in March of 2020. I had so many ideas of what I wanted to do,” says Rafal. “Then the pandemic hit, and everyone was in a panic.”

Rafal says the first wave was stressful because nobody understood the virus, and because healthcare workers did not have access to proper PPE. There was lots of misinformation, confusion, and fear. There was no testing in place and emergency protocols were not being properly adhered to.

Nurses were wearing homemade masks, but the hospital was telling people they could not wear their own masks. Rafal knew that healthcare workers had a right to protect themselves.

“I wanted to protect the healthcare workers. I focused on educating my co-workers.”

“I let them know they had the right to wear PPE, about how to file WSIB claims, and informed them that their Member Service Centre was there for them if they had any questions or concerns.”

Rafal reached out to so many members across the province through Facebook, texting, emails, and phone calls. During the first wave, Rafal also became politically active to call for pandemic pay and proper PPE. He met with NDP MPP Jennie Stevens to push for improvements for all healthcare workers.

When the second wave came, Rafal’s hospital had an outbreak. Potentially exposed to the virus, he was sent home for two weeks. Although he had negative COVID-19 tests, he was still required to quarantine without pay.

“It was very frustrating not to be able to go back to work,” he says. “It was also really upsetting that the protocols that had been put in place during the first wave did not work, and so many people got infected.”

He knew more than 100 people who became sick with COVID-19. He started an unofficial phone tree to check in on his fellow healthcare workers.

“I just started reaching out to people to check in. I knew people were lonely and scared. We created a network of people who were calling each other to see if they are OK. A lot of people had severe symptoms and complications, and others were struggling with mental health issues.”

Rafal says that a lot of women nurses were stressed because they did not have access to daycares or schooling. They were required to take on this extra challenge of watching their children and balancing work or being sick. Many of them were also feeling financial pressures because they could no longer work in two locations, so their income had been reduced. Rafal says many nurses are telling him that they exhausted, overworked, burnt out, and feeling under appreciated.

“At the start of the pandemic we were heroes, now we are being treated like zeros,” he says.

Rafal is no longer able to give his patients hugs or the time to listen to them, which is what drew him to nursing in the first place. But he maintains an incredibly optimistic spirit and wants other nurses to know that he is there for them.

“We always create positive, nurturing environments for our patients.  We need to do that for each other. Do not think you are alone in your struggles, because someone does care,” he says.

He points out the Member Service Centre (call 1-877-672-7348) is available for union members with labour issues, but also in need of assistance with mental health concerns. Rafal continues his political advocacy as he wants to close the wage gap between RNs and RPNs and to address unmanageable workloads. He is determined to continue protecting his fellow nurses.

This story was featured in issue #3 of “Scrubs and Scores”, the SEIU Healthcare Nusing Division magazine. To read more stories like this, Click Here